The Pall XRS 20 Bioreactor System is a new single-use bioreactor system suitable for applications ranging from general life sciences research to seed train operations and small scale production at the 2 to 20 liter scale. It features a 3D rectangular biocontainer that is rocked across two independent axes perpendicular to one another. These features allow for significant improvements in mixing and kLa when compared with a conventional rocking bioreactor that features a 2D “pillow” biocontainer that rocks across a single axis.

Single-use bioreactors for the cultivation of mammalian cells have many established advantages including reduced validation costs, rapid turnaround times and ease of use benefits. Additionally, the Allegro™ XRS 20 Biocontainer has integrated tubing management, which allows sampling without the need to pause the agitation. It also features a bottom mounted drain valve for simple harvesting. The inlet and vent filters utilize Pall Emflon® II technology and have been generously sized to allow for increased gas flow rates. Pall Life Sciences provides a comprehensive validation guide to accompany the system which details the testing on the biocontainer including robustness and extractables.

The Pall XRS 20 Controller is able to control agitation of the biocontainer over a wide range of conditions. From gentle agitation required for shear sensitive cultures to more vigorous conditions, generating higher oxygen transfer rates and decreased mixing times needed for the high producing processes seen in the biopharmaceutical industry today. Control of pH and DO is fully automated by the optical sensors supplied with the biocontainer. Gassing strategy is managed by three independent mass flow controllers and fluid additions can be made via three integrated pumps. All operations are managed through a user friendly touchscreen interface. Compatibility with BioCommand control software ensures full batch record traceability, making the system ideal for use in GMP manufacturing.

In this application note we will demonstrate increased performance of the Pall XRS 20 System compared to a conventional single axis rocking bioreactor, when culturing a CHO cell line producing a monoclonal antibody. It has been established in previous optimization studies that this cell line favors conditions where the mixing time is low and the kLa is high. A conventional rocking type bioreactor was set up in parallel and operated to give mixing times and oxygen transfer rates as close as possible to the Pall XRS 20 System. All tests were performed using commercially available, chemically defined media. Samples were taken throughout each bioprocess to determine cell growth, antibody production, metabolite profiles and product quality.

of shake flasks, until sufficient cells were obtained to seed an initial bioreactor volume of 5 L at 3 x 105 viable

cells for each platform tested.

Prior to inoculation, biocontainers from both reactor types were removed from their protective packaging and

placed into a laminar flow hood. Here the biocontainers were prepared for use according the manufacturers

instructions and fluid transfer connections were added to the existing ports as required by the process. The

closed biocontainers were then placed into their corresponding agitation platforms, secured and inflated with

air. The filter heaters for each system were secured to the exhaust vent filters to prevent condensation. The

Approximately 4 L of CD FortiCHO medium was aseptically transferred to each biocontainer. The air flow to each

bioreactor was supplemented with 8% CO2 to maintain a stable media pH. Both bioreactors were set to operate

at 37°C with a gentle agitation for at least 1 hour. This ensures that the medium reaches the temperature set

point and the optical sensors have sufficient time to stabilize. 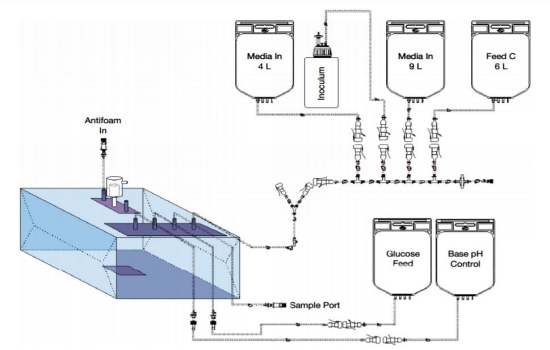 A sample from each bioreactor was obtained to measure the offline pH. This was used to verify the online pH

reading on each controller. An offset was applied if necessary. pH and DO control was activated on both systems

and set to 7.2 ± 0.05 and 40% respectively. Sufficient inoculum was prepared from the shake flask cultures and

transferred into each bioreactor. Culture conditions were applied as detailed in Table 1. 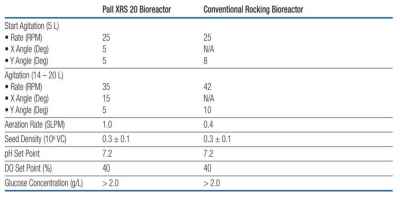 Culture volumes were scaled up to 14 L when cells grew to 3.0 ± 1.0 x 106 cells/mL. An initial feed of 1.2 L of Efficient Feed C was added to each culture when the viable cell density reached 8.0 ± 2.0 x 106 cells/mL. Four further bolus additions of 1.2 L were added at 24 hour intervals from the time of the initial feed. Concentrated glucose solution was added when required to maintain each culture above 2 g/L of glucose. Each bioreactor culture was inspected visually for foam accumulation. Antifoam C was added when necessary.

Viable cell density and cell viability, as well as culture pH, lactate and glucose concentrations were monitored for all cultures on a daily basis using a BioProfile FLEX analyzer. Culture samples were taken on a routine basis for offline mAb quantification by HPLC, charged variant analysis by UPLC and glycoform profiling by mass spectrometry. 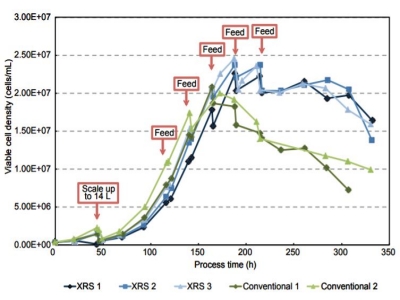 Cultures from both the conventional rocking bioreactor and the Pall XRS 20 System grew at a similar rate up until hour 165 at which point cells in the conventional device entered the stationary phase. As shown in Figure 2, cell growth continued in the XRS 20 for a further 24 hours. This resulted in an average maximum cell concentration of 2.36 x 107 viable cells/mL, an increase of 16% over the conventional rocker average.

The total number of viable cells in the conventional bioreactor began to steadily decrease shortly after entering the stationary phase (Figure 3). In the XRS 20 bioreactor however, high culture viability was maintained for close to 100 hours. This shows that when operating both bioreactor systems at the conditions listed in Table 1, there is an increase in both the maximum cell density and culture duration with the Pall XRS 20 System. 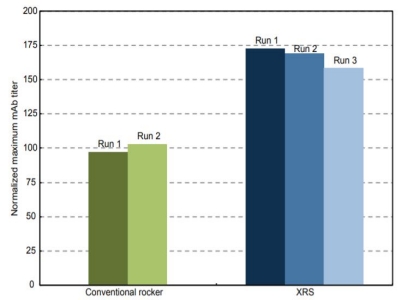 From Figure 2 and Figure 3 we have demonstrated that with this process, the Pall XRS 20 System is able to produce more viable cells for a longer duration. This is reflected in the end monoclonal antibody concentration from each reactor. Figure 4 shows that on average there is a 67% increase in target antibody production in the Pall XRS 20 System over the conventional bioreactor.

Figure 5: Comparison of lactate concentration in XRS and conventional rocking cultures over time. Data plotted for each process from daily and post feed FLEX samples. 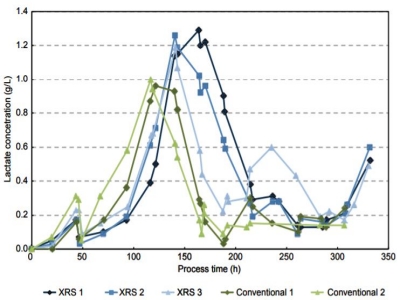 Lactate was produced at a similar rate in the initial stages of each culture (Figure 5). The switch from lactate production to reuse corresponds with the onset of the stationary phase. As observed from the cell growth data, this happens approximately 24 hours earlier in the conventional rocker platform (green lines) compared to the Pall XRS 20 System (blue lines). The higher lactate concentration observed in the XRS cultures correlates with the higher cell density.

Ammonium production shown in Figure 6 again indicates a similar trend for all cultures during the exponential growth phase. However, there is a higher rate of ammonia reuptake in the cultures grown in the XRS system at the switch to stationary, and trend continues until harvest. The net effect is lower ammonium in the XRS culture compared to the conventional rocking system.

Figure 6: Evolution of ammonia in the Pall XRS 20 and conventional rocking platform. Data plotted for each process from daily and post feed FLEX samples. 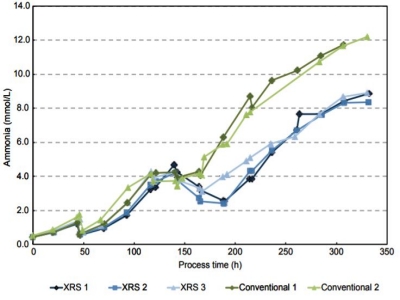 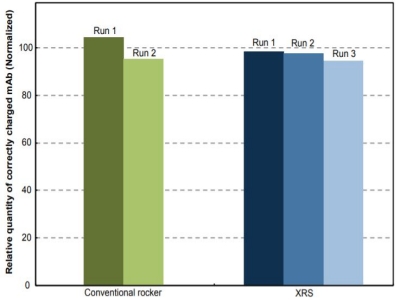 Process conditions in the bioreactor can have an impact on the quality of the therapeutic protein produced. Figure 7 shows the end point target antibody from UPLC charged variant analysis, normalized against the average for the conventional rocker. A similar profile is observed between both reactor types.

Figure 8: Results of glycosylation profiling for the harvest sample in the Pall XRS 20 and conventional rocking platform. Note the method of analysis was unable to determine the structure of unknown 1. G1F Form A and G1F Form B are isomers of the same glycan. 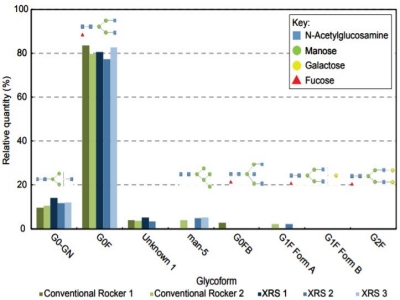 Despite the significant increase in the quantity of monoclonal antibody produced there was not an increase in relative amounts of undesired post translational modifications such as deamidation, pyro-Glutamate formation and other different Glycoforms (Figure 8).

In this note we have demonstrated that the Pall XRS 20 System is ideally suited to the cultivation of CHO cells. The improved engineering performance achieved by the unique rocking motion of the XRS can translate into improved cell culture performance when compared to a conventional rocking single-use bioreactor. This is shown by improved cell titers and increased antibody production without compromising on product quality.