Dirt capacity continues to be a widely requested rating factor for filters because it seems easy to measure and understand. It is often used to predict filter service life or to compare filters. Unfortunately, dirt capacity alone is of little value in estimating filter service life or in comparing the relative service lives of competing filters. Realistic estimates and comparisons can be made only when test conditions, filter efficiency ratings, and details of field operating conditions where the filter will be applied are known.

When selecting long-life hydraulic or lubricating filters,the primary concern should always be the filter efficiency. Filters must be capable of adequately removing and controlling particles equal to or slightly larger than the clearances in critical system components. Then the filter should be sized to provide adequate element service life. Higher efficiency filters produce lower contaminant levels and less component wear. Thus,more efficient filters can provide longer element service life than coarse filter elements with similar or higher dirt capacity ratings.

The dirt capacity of a filter is defined as the weight of a specified contaminant that can be added to the filter element before a designated terminal pressure drop is reached (indicating a plugged filter). Many methods are used to measure dirt capacity, including single-pass, Multi-pass, batchinjection, and continuous-injection testing. Also, various contaminants are used, each producing different results. The most commonly used industrial procedure to measure dirt capacity is the Multi-pass test, ISO 16889 (formerly ISO 4572). This procedure calls for continuous injection of ISO Medium Test Dust (ISO MTD) in slurry form into the reservoir upstream of the test filter. The Multi-pass test circuit (shown in Figure 1) is used to simulate actual hydraulic or lubricating systems, and dirt not captured by the filter on the first pass is allowed to recirculate in the system. 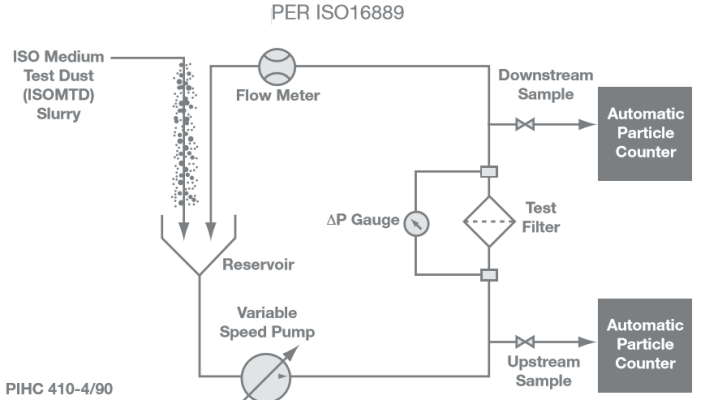 The dirt capacity determined from an ISO 16889 Multi-pass test is called the Retained Capacity, which is defined as the mass of ISO MTD effectively retained by the filter element when terminal element ∆P is reached. The previous Multi-pass procedure, ISO 4572, reported a parameter called apparent capacity. This was the amount of ISO test dust added to the test system until the terminal differential pressure (∆P) was reached. The term “capacity” was removed from this parameter in the latest ISO standard, ISO 16889, and this value is just called “contaminant mass injected” because the parameter is misleading and does not relate to capacity or indicate whether the dirt is actually removed. Using the parameter “Retained Capacity” is an improvement over the old apparent capacity; however, it too can be misleading if used to estimate filter service life.

Several test parameters such as flow rate, type of contaminant and terminal pressure drop have a dramatic effect on measured dirt capacity. Although most test procedures are written with standardized parameters to produce repeatable and reproducible results, important variables such as flow rate and terminal pressure drop are often left to the discretion of the test laboratory. Dirt capacity values should only be compared for filters tested under similar conditions.

This is difficult because most manufacturers do not publish complete data or details of their test conditions. Hence, the only way to insure reliable data for comparison is to obtain results from one laboratory that has performed “side-by-side”testing under identical conditions. (NOTE:even when accurate comparative dirt capacity data are obtained using this method,the correlation between dirt capacity and comparative element service life is poor and unverified–see later section, Factors That Affect Filter Service Life.) 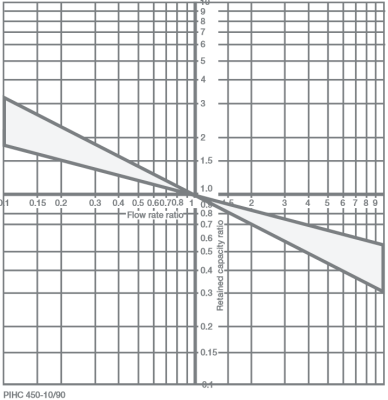 Flow rate: Studies have shown that the lower the flow rate, the higher the measured dirt capacity, and vice versa. The results shown in Figure 2 are based on numerous laboratory tests of various grades and types of filter media. Because of the significance of flow rate, the test flow should always be specified when a dirt capacity value is reported.

The service life of a hydraulic or lubricating oil filter is defined as the length of time the element can be used in an actual system before reaching a specified terminal pressure drop. Service life is important because it indicates how often the filter element must be changed,and should be part of the user’s preventive maintenance program.

Several factors affect the useful service life of a filter, many of which are concerned with operational integrity, such as cold start, flow fatigue, collapse/burst pressures, material compatibility, and other dynamic stresses. It is important to avoid underrating these factors by excessive focus on the less important dirt capacity. All factors must be considered when selecting a filter; however, discussion of factors other than dirt capacity is beyond the scope of this article.

Dirt Capacity:  If all other factors are equal, a filter with a higher dirt capacity should have a longer operating service life. However,this ideal situation is practically impossible to produce because other factors inevitably interfere. For instance, if two otherwise identical filters, one with twice the area of the other,were installed in a system, the larger filter would provide more than just twice the life because of the difference in flow density (flow rate per unit area). 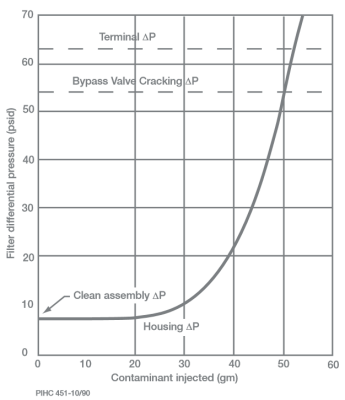 Built-in: Contaminants that are usually left inside hydraulic and lubricating systems when they are assembled typically consist of debris inside components, weld slag, rust, Teflon tape, paint chips and initial contamination in the new oil. This built-in contamination should be removed by flushing, therefore eliminating any influence on the average service life of the system filter.

Internal generation: The principal source of contamination in today’s well-designed systems is internal wear. Wear debris can be generated in pumps, motors, valves, cylinders, gearboxes,transmissions and nearly all other components due to abrasive,erosive,or adhesive wear. Metal particles generated by wear usually are work hardened, so they are harder than their parent surface. If they are not removed by filtration,and are allowed to recirculate in the system,they will produce additional wear. This is called the “chain reaction of wear”and will continue until the particles are removed.

The chain reaction is obviously more severe if coarse filters are used. This is due to their failure to capture the wear-generated particles that can cause this additional wear. In a test of the effect of different filters (Fig. 4) on an actual operating hydraulic system,a conventional coarse (β21(c) = 2) filter was retrofitted with a high efficiency (β5(c) = 1000) filter element. In 20 minutes, the particle count larger than 6 µm(c) was reduced from 20,000 to 200 particles per mL. During the next 300 hours, the contamination level was futher reduced to less than 25 particles per mL. A new conventional coarse element was reinstalled, and after 100 hours, the particle count had climbed back up to over 8,000 particles per mL. This illustrates the ability of a fine filter to keep system contamination at a low level. 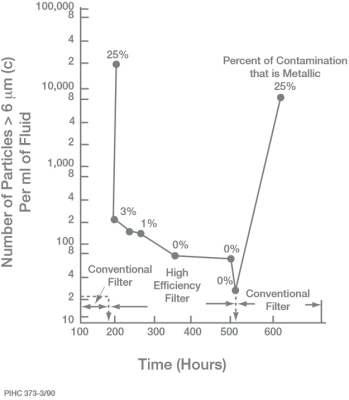 Figure 4: Eliminating the Chain-Reaction of Wear

Particles generated as a result of abrasive wear are work hardened; thus they become harder than the parent surface and, if not removed by proper filtration, will recirculate to cause additional wear. This "chainreaction-of-wear" will continue and result in premature system component failure unless adequate filtration is applied to “break the chain.”  In today's conventionally filtered hydraulic and lubrication systems, internally generated wear debris is the principal source of contamination.

The most important result of this test was the reduction in the percentage of metallic particles from 25% to 0% when the fine filter was used. This indicates that the chain reaction of wear had been broken. When the coarse filter was reinstalled, a higher contamination level was allowed to circulate, the wear process was restarted, and the metallic content immediately increased.

The primary objective when selecting a filter is choosing one that will consistently - in all operating conditions - control the particles in the size ranges that are damaging to the system. Then the filter should be sized to provide economic service life. Because the total service life depends on the amount of contamination in the system as well as the filter operating conditions, all these parameters should be considered when selecting and sizing a filter. 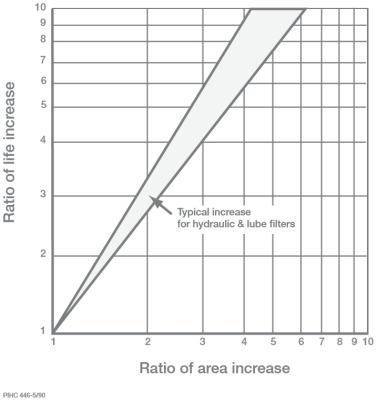 Several guidelines can be used in selecting filters to provide long service life. They are: